We were met in Moscow by Maria Kosmolinskaya, director of the National Humanitarian Cultural Center "Sakha-Art" in Moscow. On the trip from the airport we learned of the workings of Maria's center. She has both federal and Sakha status, though no funding from either direction. Her Center's affiliation with the government of Sakha Republic is through the Ministry of Culture. We were all tired so we only went for a short walk in Moscow before returning to the hotel to rest.
Maria agreed to take us the next day to see the sights in Moscow while we awaited our trip to Yakutsk. We visited the Tretyakov gallery, and Red Square. 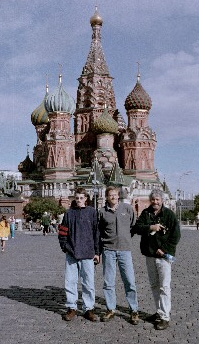 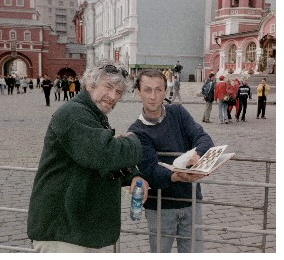 We dined at an all-you-can eat buffet in a shopping mall. In these places, economic life in Moscow seems to be very much like the rest of Europe. The subways have declined over the years, but if the subway tunnels are the veins and arteries of the city, its circulation is still healthy. Our mid-day departure on the 18th gave us enough time to see the Pushkin museum.
Our flight to Yaktusk brought us in a little early. After time to collect ourselves at the hotel Saisary we were ushered to the Museum of Music and Folklore of the Peoples of Yakutia where we had an impromptu lecture from Aiza Petrovna Reshetnikova about Sakha singing traditions and the mythology behind them. 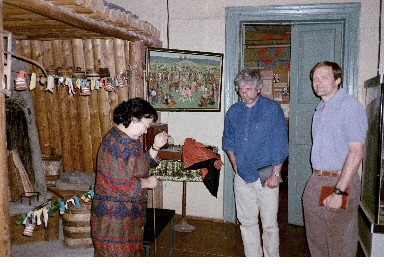 Among other things, Aiza Petrovna explained that the Sakha people were known across Siberia as good blacksmiths.
Later in the day we visited Sakha film and had the opportunity to meet with director Aleksei Romanov (Wot Ajarkhaan). David Halliday spoke with Aleksey for about an hour. They showed each other films and discussed the possibility of working together on film projects. Aleksei was leaving to prepare a film shoot so this was the only opportunity that we had to meet with him. 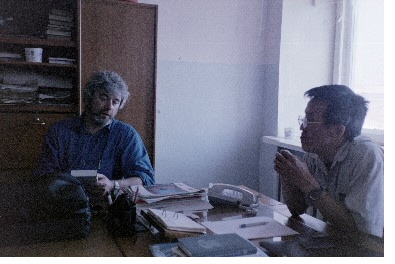 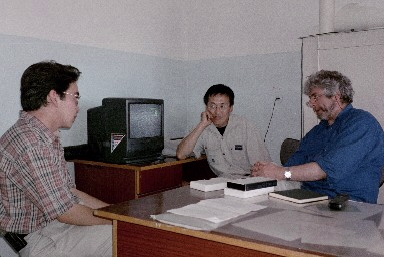 Ysyakh - Namsky ulus
On the next day we were scheduled to attend the Ysyakh of Namsky ulus. This ysyakh began with a series of speeches by various local dignitaries. They included political leaders and veterans of various ages. After the opening ceremonies we watched some of the preparation for the festivities and then were brought through the woods to a picnicking area where there was a large yurt shaped structure. Eventually we were ushered into the yurt where we were seated at tables along the side. This gathering was to be a special meal for honored guests. 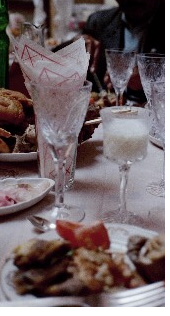 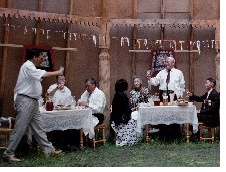 After the festive meal we walked past some osoukh circle dancing (see below) on the way back to the stadium area to watch the wrestling matches. This is a traditional form of wrestling with continued popular support and there was not only the traditional prize of a leg of smoked horsemeat, but also a new motorcycle. 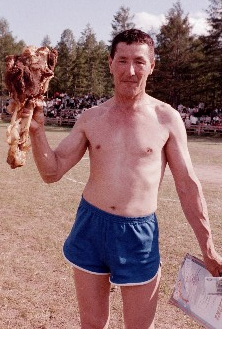 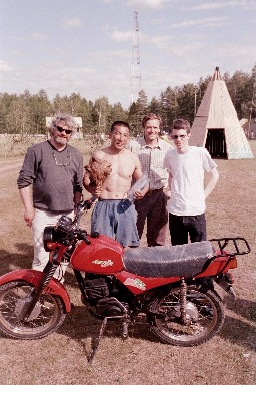 The other athletic events included carrying a huge stone and a two-man tug-of-war with a stick.

After the wrestling we decided we had seen enough, but we were discouraged from leaving because the head of the ulus, Aleksandr Yadreev, wanted officialy to see us off after the start of the horse racing. We saw the beginning of the horse racing and then drove off. Our send off did not come until the edge of the ulus, a high point where there was a good view of the surrounding forests. 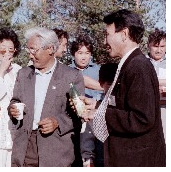 It was intended to be a brief send off, but head administrator Yadreev took such a liking to us that we talked and drank for well over an hour.

Ysyakh - Pokrovsky ulus
On the following day we attended the ysyakh of Pokrovsky ulus. The general atmosphere of this ysyakh was more religious and ritualistic. The opening ceremony was designed by Afanasi Semenovich Fedorov from the College of Culture and Arts. It was richly costumed and beautifully performed. We were fortunate also to meet Spiridon S. Shishigin, star khomus player. We were able to do a brief recording of his playing. 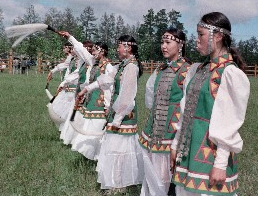 Osoukh Dancing
There were competitions in a variety of categories of traditional activities, singing, dancing and playing the khomus (mouth harp). One of the traditional activities of the ysyakh festival is the dance form known as osoukh. Dancers hold hands in a circle and dance to the rhythm of a chant by an osoukh chant specialist. Chant performances are judged on the quality of the text, the performers' enthusiasm and skill and especially on their ability to attract a crowd to their performances. Judges kept notes of scorecards and at the end of the competition conferred in order to determine the winner. 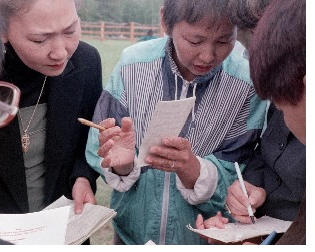 Children played a big role in this ysyakh, both in the opening ceremonies and in the afternoon music and dance competitions. 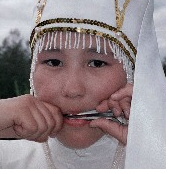 Ysyakh - City of Yakutsk
The grand ysyakh was that of the City of Yakutsk, held June 24-25, held at a kind of ysyakh fairgrounds--a beautiful green plain with lakes and vast landscape in the distance.

On June 23rd we were able to see the dress rehearsal for the big performance scheduled for the next day. The performance area was roughly the size of a football field, though circular and encircled by a log fence =with sacred birches lining the entrances. Groups of young people worked together on their segments within the performance on the sidelines. The directors used both the loudspeaker system and walkie-talkies to coordinate the various components of the ceremony in the broad performance space. The next day, at the actual performance, dignitaries sat on stools set on a rise at the north end of the performance area. The ritual opened with the chanting of Afanasi Semenovich performing the role of the white shaman. It then depicted the legend of a warrior who must descend to the underworld and fight a black shaman in order to retrieve a princess held hostage. The danced battle scenes were excitingly performed and the images of the underworld spectacular and scary under the dramatic sky.
We were invited as special guests of honor to eat traditional foods and drink toasts in the immense yurt structure that only the day before had been still under construction. The food again consisted of fish and horsemeat in various preparations.
This ysyakh also had competitions, including sports, music and dance. The most impressive part of the ritual was the meeting of the sun ceremony held at 3am. There were songs, speeches and dances at this ceremony. It was made dramatic by the mood swings of singing, clouds and rain. 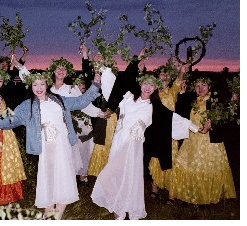 Other highlights of the trip included a meeting with Daria Tomskaya, the only known singer of traditional olonkho songs who learned them as a tradition to be repeated. Eighty six years old, Tomskaya speaks no Russian. She knows 40 traditional olonkho ballads and her singing has been intensively studied by Vera Semenovna Nikifirova. We also were able to visit the Mammoth Museum at the University, though the exhibit was officially closed. Finally, we also had the opportunity to make a short excursion on the Lena River, according to our hosts, the third largest river in the world. 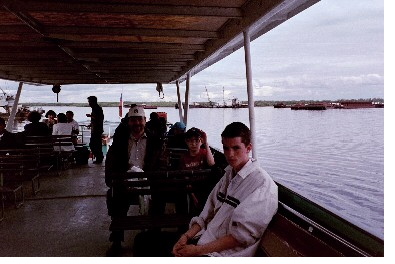